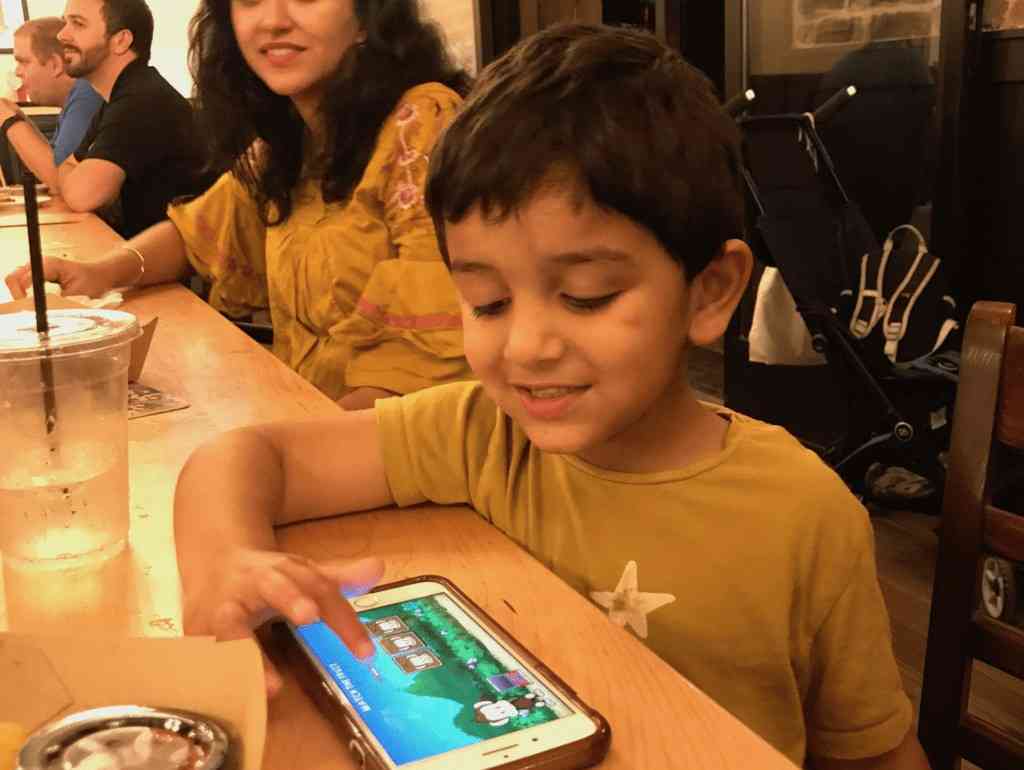 Do you remember what it was like in the olden (i.e. pre-iPad) days, when you would go to a nice restaurant with your family? You would spend about 60 percent of your time entertaining your child, 20 percent making apologetic looks to other diners, 15 percent wondering why you ever thought this was a good idea, and maybe 5 percent enjoying your time there. Well, multiply that by a 100 and that is what it can be like to travel with a child. But there is a cure: Technology. And we think it’s a pretty good cure!

To be fair, the role of technology is a controversial topic within parenting. Some parents see no problem with letting their kids play on a phone or a tablet, while others frown on it. Our personal conviction is that technology can be an excellent way to keep kids engaged with something—and thus out of your hair—so that you can enjoy a nice meal, a bus tour, or whatever else.

The catch, though, is that we personally let our son use apps and programs that are educational. We don’t merely want him to be distracted; we want him to actually take something valuable from the experience, as well. And it’s paid off for us in surprising ways: Our little boy frequently impresses grown-ups with his knowledge of things like colors and numbers, and some of our fellow parents seem to think we’ve done something really amazing. Honestly, we mostly chalk it up to our liberal use of technology. For example, by the time he was two and a half, he could spell most of the colors—not just recognize colors, but actually spell most of them. He got that from apps!

We used this approach many times on our sabbatical, especially when we needed our toddler to sit still for long periods of time—on a plane, for instance. Technology enables you to occupy your child without one of the parents having to step out with him. Thus, both parents can actually enjoy their time together.

Our Philosophy of Technology

The way we look at it is that technology is a big part of everyone’s life. There’s no avoiding it, and one day, your son or daughter will be using phones and tablets and apps, probably pretty regularly! Since you can’t escape technology, we think it’s important to be purposeful in how you use it. In fact, by starting your kids on tech early, you can help them acclimate to the world they’re going to be living in, and potentially give them a leg up.

The bottom line: We think technology is a very good thing for kids, so long as most of it is educational and informational; and, it can also be a useful thing to have during your travels, or really at any point mom and dad need some time to themselves.

It’s important to understand that giving your child apps and devices is not without its taboos. We often hear parents declare that they never let their kids use technology. For some, it’s a point of pride. That’s something you’ll probably encounter, too.

We had some of our own concerns. We knew we’d be using technology on our sabbatical, but were worried our son would become addicted. We feared coming home to a world in which he simply must have a video on at all times, or some sort of a screen in his hands.

Thankfully, this hasn’t been the case. We still allow him to have videos and apps, but he often pays little attention to them, and sometimes rejects them altogether. Technology was super useful to us in our travels, but it hasn’t turned our boy into a zombie. Not by a long shot.

Our Approach and Results

We started using technology with our son when he was pretty young; we showed him our iPad to keep him entertained, initially with nursery rhymes, learnings songs, etc. As he got older, we let him play with our phones and learn to manipulate them with a wider variety of apps. We used phones and tablets on our first flight (he was 4 months then) and also started using apps in restaurants, just to keep him distracted.

When we left on our nine-month sabbatical, we increased our use of technology significantly. We let our son have apps and videos on the plane, in restaurants, and even on certain walking tours. We allowed him to play on apps while we worked out each day. We were cautious though about using technology in the car, as we found that it can lead to some car sickness.

Something we discovered early on is that educational apps and videos tend to really work, in large part due to the repetition; our son was able to learn letters, words, shapes, numbers, colors, and so much more because of educational technologies that continually repeated concepts, in a way that teachers and even parents do not have time to do. At an age where we probably couldn’t have told you what a square was, our son was able to recognize a parallelogram and that is all thanks to the repetitive nature of his favorite apps.  Similarly, we have a story from his third birthday, where he walked down the corridors of our cruise ship recognizing the last three digits of the room numbers and screaming out “eight hundred fifty four” – that threw us for a loop!

Another thing we noticed is that apps help children discover new areas for learning that we didn’t even contemplate. Take YouTube for example. Our son would watch a video about numbers, then click on a “related” video that gave him bigger numbers or numbers in a different language—both videos he’s never seen before.

Another awesome thing about apps is the sheer number that are out there—and the longevity that each one provides; kids can use these apps over and over and learn new things each time, growing in their understanding of concepts and ideas. These apps are scalable as a child grows, and that’s pretty cool!

Get These Apps Before You Travel

If it’s specific app and technology recommendations you want, we can offer several—all ones we found to be valuable as we traveled. To organize all the kids apps, we just created a folder Kids games on the iPhone and it makes it easy for Aarav to find all his games in one place.

Want to get the remaining travel app suggestions? Download our book today.

Thank you for reading our article! We have provided a preview of what you’ll get in our book, How to Travel With Kids (Without Losing Your Mind). You will get the remaining travel app suggestions to keep your child entertained plus so much more

5 Simple Ways to Survive a Road Trip with a Toddler

[…] the big guns such as the Kindle or the iPad. There’s no shame in it; we have all been desperate! Download videos or apps onto your devices that can be used in case of emergency.  For us, we prefer to download […]