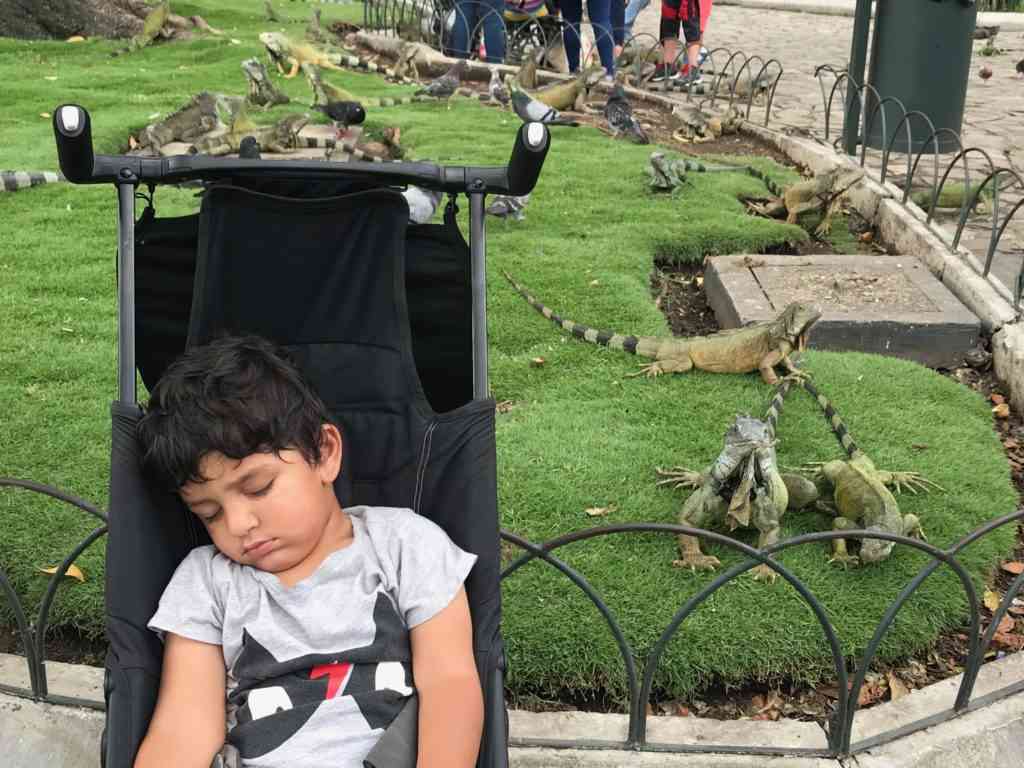 This is every parents’ nightmare when traveling with children – their sleep routine will be disrupted, no one will get any sleep, and everyone will be miserable. This rings true especially when you know you’ll be crossing time zones. But, from experience, we can tell you that children are very adaptable, and worrying about their sleep schedule shouldn’t keep you from traveling. Yes, you may have some trying times, but overall, things will likely go more smoothly than you thought. We’ve compiled a few tips that we’ve learned along the way and that can help you feel more confident when traveling with young kids.

First, we have a quick disclaimer: our son is typically a pretty good sleeper. If your child is not, you may face other challenges and have to adapt these strategies to fit your needs or situation.

Sleeping on the Plane

Whether you’re flying to another state or another country, you’re going to be faced with being cooped up on the plane. It can be tough to keep your kids entertained in such a confined space, so getting them to sleep during the flight can be a life saver. If you know the flight will be long, plan for an overnight or late-night flight. Your child will already be tired, and they’ll burn off more energy running around the airport before you take off. They’ll fall asleep on the flight and (hopefully) sleep until you arrive at your destination. This also allows you to catch some sleep as well, and you’re not stressed out trying to entertain and manage your child during the flight. This works well for long drives too!

If your child is under 2, most airlines do not require them to have their own seat. Try to pick a bulkhead seat so you have extra room and can set up a bassinet or have more space to hold them. If your child is tall – like ours, we found that getting him his own seat was worth the investment. He could lay across our lap and his seat to sleep, plus had space of his own to move around. It can be easier than trying to contain a young child on your lap the whole time.

Another tip is to feed your child ahead of time if you know they’re tired and will likely fall asleep before food is served. This way they’ll have a full belly before drifting off and can sleep more soundly. When our son was young, we’d change him into pajamas and wrap him in a swaddle on the plane so it felt more like bedtime and he associated it with sleeping.

This is what keeps a lot of parents from traveling to countries they’re yearning to see. If it’s 7 p.m. in the Eastern United States (when your child might typically go to bed), it’s already 1 a.m. in Spain or 4:30 a.m. in India. That is sure to throw a kink in things.

For instance, in Spain, the culture is much different. People don’t often start eating dinner until 8 or 9 p.m. By the time dinner is over, you’re back at your hotel, and your child has had time to unwind, it may be around 1 a.m., which is close to their bedtime in the U.S. anyway. Not much adjusting to do. And, by allowing them to stay up later, they can taste the local cuisine and not be stuck eating McDonald’s or snack food because they’re going to bed before dinner is served.

But when you’re traveling somewhere that the time difference will be noticeable, and when the travel schedule may not align with the routine you expect at the destination, it’s a good idea to start preparing a day or so in advance to get your child on the schedule of where you’re going. For instance, when we went to Iceland, it was a four-hour time change, and they ate dinner around 7 p.m., so we wanted our son to go to bed soon after. However, it would still be pretty early in the U.S., so we took steps to help him adjust. Even though it can make for a crazier day, wake your child up two or three hours earlier than normal and have them go to bed earlier as well. This will help with the transition. Plus, it also helps to keep them active during the day of travel so they’re exhausted and ready to sleep earlier.

If it is a major time change and you couldn’t adjust beforehand – like when we flew from Dubai to Beijing – your best bet is to simply go with the flow. When we arrived in Beijing, it was around midnight, but it was only 8 p.m. in Dubai where we had just been. Our son was not tired yet because he was used to going to bed in another three or four hours.

Want to get more tips on managing sleep? Download our book today.

Thank you for reading our article! We have provided a preview of what you’ll get in our book, How to Travel With Kids (Without Losing Your Mind). You will get how to handle traveling East vs. West, setting up sleeping arrangements, handling afternoon naps and so much more!